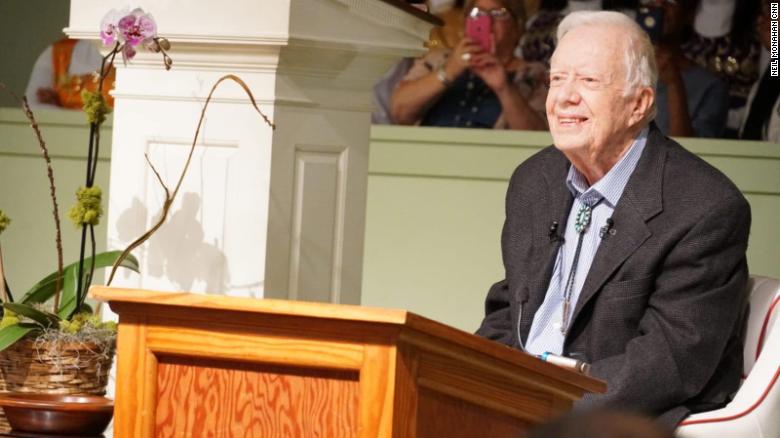 Jimmy Carter, whose life-long faith and charity work is well-known, has taught Sunday School for most of his life. Perhaps you didn’t know it, but you can actually attend his class at Maranatha Baptist Church, though they recommend you get there no later that 5:30 am if you want a good seat! (Back in May, presidential hopeful Pete Buttigieg attended the class, which prompted some to criticize the politicization of the event.)

But as a recent article over at History News Network describes, visitors in the class may get a history lesson from Carter along with the spiritual teaching. In fact, Evan A. Kutzler makes the case that Carter has become something of a public historian. (A historian who brings the past to the public through museums, historical sites, archives, etc.) The Carters’ church is not far from the former president’s boyhood home and other sites part of the Jimmy Carter National Historic sites. Carter himself has played an active role in the interpretation of these sites and what visitors hear as they tour the grounds. Kutzler says this is in no small part a result of Carter’s 2001 memoir, An Hour Before Daylight. What is more, both he and Rosalynn are active fundraisers for local history sites. The result is hometown history infused with presidential significance. Kutzler writes:

As board members of the Friends, the Carters play key roles from interpretive work to fundraising. Rosalynn Carter recently led the way in putting Plains on Georgia’s Camellia Trial. In 2016, the National Park Service made President Carter an honorary park ranger and the Carters have given special programs on President’s Day for years. Together, they have helped the Friends group raise millions of dollars for the park. This fundraising has enabled the organization to hire a full-time education specialist who creates museum lesson plans and coordinates field trips. In some ways, the Carters have created a living history museum of 20th Century rural America in Plains with a twist: the global perspective of a former president and first lady.

What Is a Liberal Arts College? (Jim Beilby)

Last month I dedicated an issue of my new Substack newsletter to criticizing the decision by Saint Mary’s University of Minnesota to eliminate its majors in art, English, history, music, Spanish, theater, and theology. “Let’s not kid ourselves,” I wrote, “if you can’t sustain meaningful programs of study in history, languages, and fine arts, you’re […]

This week I considered how my writing mirrors my teaching and reflected on a year-long conversation about how Christians follow Jesus. Elsewhere: • I’m not sure the temperature got above 80°F (27°C) when I was in Germany last month. But July has been a different story, with scorching heat waves across Europe. • John Hawthorne concluded his series on polarization with some potential […]