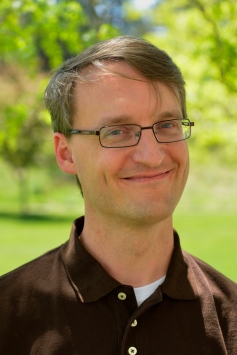 This week we welcome Bethel University history professor, Chris Gerhz, to The Hermeneutic Circle’s “hot seat.” This is a real privilege since Chris has been such a great model of what it means to integrate academic excellence and Christian faith. In addition to teaching a variety of courses at Bethel, Chris blogs at the Pietist Schoolman as well as the Anxious Bench. In his scholarship, Chris has taken a leading role in an effort to reclaim the merits of the Pietist movement for both the Christian academy and the church. But if you thought you had Chris pegged as a one-trick pony, you’d be wrong. He is also a specialist in 20th century Europe and the world wars. In fact, his current research project departs from his writing on Pietism and turns instead to aviator Charles Lindbergh. He’s writing a “spiritual biography” tentatively titled, The Famous Unknown. Chris was gracious enough to recommend the Hermeneutic Circle to his readers recently and this week I am privileged to have him on the hot seat. I asked Chris to give me an update on the Lindbergh project and talk about what he’s been up to these past few months. Here’s what he had to say:

THC: Last summer you announced your next project as a spiritual biography of Charles Lindbergh. You’ve given updates along the way, especially about Lindbergh’s life and influence during the WWII era, including his connections with Nazism. So … How’s it going? Are you on track to finish in 3 years like you planned?

Gehrz: We’ll have to see how the writing itself goes, but my summer research was certainly promising. After starting with a couple of days at the Library of Congress reading manuscripts of Lindbergh’s most famous book, The Spirit of St. Louis, I spent a month going through the main Lindbergh papers at Yale University: diaries, letters, more book drafts, family records, etc. 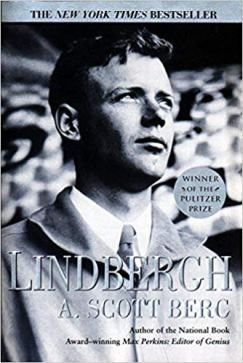 a bit daunting. I picked up enough hints of those themes in traditional biographies like Scott Berg’s that I thought there was something to the idea. But I held my breath a bit when it actually came time to dig into the archives. Fortunately, there was actually a great deal of intriguing material. Starting in the late 1930s and then throughout the rest of his life, Lindbergh reflected often on spiritual and metaphysical questions, often in conversation with figures as diverse as Alexis Carrel (a medical researcher and Catholic mystic), Jim Newton (a Christian businessman active in the Moral Re-Armament movement), and Lin Yutang (a Chinese writer who moved between Christianity and Eastern religions), plus Hindu mystics in India and animists in East Africa and Oceania.

THC: So I’m curious – what did you find? Can you share any interesting surprises or nuggets that you are excited about? Any good document photos you can share?

Gehrz: There’s a lot to go through yet, but let me mention two fun nuggets: 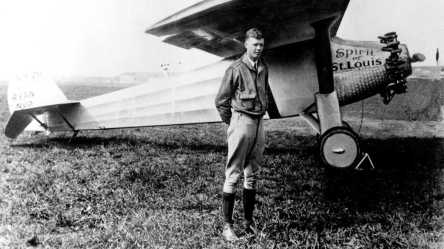 • In 1955 the great filmmaker Billy Wilder was working on the screen version of Spirit of St. Louis. He and his co-writers invented a conversation about faith between Lindbergh (played by Jimmy Stewart) and a Catholic priest who is mentioned briefly in the original book as one of Lindbergh’s early flying students. Lindbergh read the script and complained to the producer:

I hope [Wilder] doesn’t go overboard with God. It’s awfully tempting to do so at times, but I don’t think it’s religious — in the deepest sense — and it certainly wouldn’t have fit in with my character, then or now. I have a hard enough time keeping in the general Christian category.

In the end, the scene stayed in the movie — along with a beat at the end when Lindbergh seems to pray for God’s help as his transatlantic flight ends with a nighttime landing in Paris. Lindbergh took his family to see the movie at Radio City Music Hall, and his daughter Anne complained that, while the film was “way above average… it does make you seem converted to Catholocism [sic] in the end.”

• Then right as I was running out of time and trying to get through as many folders as I could before leaving New Haven, I came across a series of early 1970s letters from Lindbergh to a pair of Benedictine nuns he had gotten to know at the Abbey of Regina Laudis in Connecticut. I need to dig deeper into that relationship (I understand that Lindbergh’s wife Anne was a regular visitor to the abbey), but it was yet another example of how Lindbergh blended disdain for traditional religion with spiritual curiosity (e.g., he asks about baptism at one point, admitting that he had never been part of a baptism before).

THC: Other than the fact that this will be the first biography to focus on Lindbergh and spirituality or religion, are there other ways you hope this project contributes to our knowledge of Lindbergh?

Gehrz: I don’t know that I’ll bring any more clarity to this question, but I’ll no doubt have to grapple with Lindbergh’s views on Nazi Germany and what he called “the Jewish problem.” One way or another, it’s deeply troubling to read some of his public and private statements from this time period. For example, here’s a post I wrote about his 1939 Reader’s Digest article calling for America to stay out of “a war which will reduce the strength and destroy the treasures of the White race.” In his files, I came across a response from one Christian feminist: “This new world that you are envisaging and recommending to us is the antithesis of that Christian and Hebraic world.”

But what also is becoming more and more clear to me is that World War II itself was a turning point in Lindbergh’s life. He may not have wanted it fought in the first place, and surely not with American involvement. But after Pearl Harbor, Lindbergh volunteered for military service, and ended up secretly flying dozens of combat missions in the South Pacific in 1944. In some ways, he never stopped reflecting on that experience, which did much to chasten his faith in science and technology — and to complicate his assumptions about Western superiority.

Gehrz: Photo of Lindbergh’s diary entry from April 3, 1944 — preparing to deploy to the South Pacific, he stopped by a book store in New York and bought a small New Testament, explaining that “Since I can carry only one book… that is my choice. It would not have been a decade ago; but the more I learn and the more I read, the less competition it has”

THC: What is your writing style? Do you work on this project daily? What practices have you found to be helpful in meeting your goals?

Gehrz: I’m a sporadic worker when it comes to research and writing projects. In June and early July I spent 8-12 hours a day on Lindbergh stuff — thanks to my wife for giving me that time alone while she and our kids visited her family in Iowa!! And I thought about it endlessly during all my cross-country driving, to the point that I started to mock up several chapters. But then I committed to setting it aside for the rest of the summer: both to make up for lost time with my family, and to let my thinking percolate for a while. So this interview marks the first time I’ve revisited that research since I got back from the East Coast.

Once classes are up and running, this fall I’ll start by spending a couple weeks just reading through all those notes and photos I took in June, then decide on next steps. I’ll again have an undergraduate TA helping with some smaller research tasks, and I’m thinking of writing an article on the historiography of the “spiritual, but not religious” category — as background to the biography, if nothing else.

The real trick will be transitioning from research to writing, probably in the middle of next summer. To this point, the books I’ve worked on since coming to Bethel have seen me function as an editor or co-author: hard work, but very different from being the sole author of a manuscript. I need to rethink how I can do that kind of writing in the middle of my other work commitments.

Until then, I’ll keep using my blogs to do what Sherman Dorn calls “preargument” writing. That’s an idea I first tried out in 2014-2015, when I was working on a digital history project with a student, and we agreed to blog about our research in the months before we wrote the actual narrative. (Likewise, I preceded my last book with a series of podcasts that let my co-author and I talk through each chapter before we wrote it.) Using digital media for “preargument” work gives me a chance both to communicate with my potential audience even before the book is ready and to “think in public” about what I want to say.

2 thoughts on “Historians on the Hot Seat: Chris Gehrz on Charles Lindbergh and “The Famous Unknown””

Check Out My Newsletter on Substack!

After about a year and a half of deliberation, I decided over the weekend to start a Pietist Schoolman newsletter on Substack. Founded about five years ago, Substack provides writers with an easy means of hosting a newsletter that is both emailed directly to subscribers and can be shared as a link to a website. […] 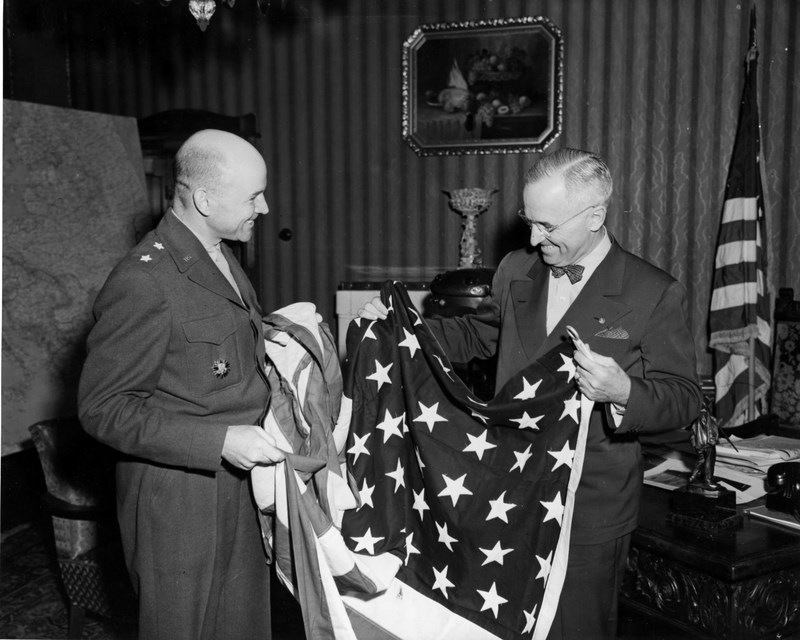 This week I revisited a familiar challenge facing Christian colleges, reflected on a visit to one of the “most cynical examples of Holocaust commemoration I’ve ever seen,” and shared one of the most satisfying reviews of my Lindbergh biography I’ve read yet. Elsewhere: • Fewer than 40% of Americans told Gallup they were “extremely” proud to […]